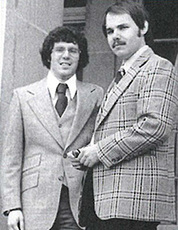 On June 16, 1975, I was 21 years old. I wouldn’t turn 22 for a couple of months. I had just graduated from Boston University with a Bachelor in Arts in history. How far was that going to get me? My dad a successful attorney had always wanted me to go to law school. It was the only way I could ever go into the family business. Long story short, I didn’t do that great on the Law Board exams and had not received any acceptances to law school prior to college graduation.

Low and behold I got a late acceptance to Northern Illinois University, College of Law in early June. Located in the suburbs of Chicago it was a relatively new law school with a liberal admissions policy. I was required however, to attend an orientation pre law seminar on campus that June. It seemed the law school wanted to make sure I, as well as some others, could handle a law school curriculum.

I trekked off to Chicago and checked into my dorm room not knowing what to expect. Was I the only one they deemed necessary to prove their academic ability? How many others were there in my shoes? Turns out there were about 30 of us.

I checked into my dorm room, dropped my duffle bag of stuff off, walked out into the hall, and literally bumped into a skinny little guy with a big curly Afro like head of hair, who stuck his hand out, shook my hand and said…. ” I’m Dan Roberts, nice to meet you.” That’s all he needed to say, I knew he was a New Yawker like me. The rest as they say is history.

As I write this it’s June 16, 2015. WOW! In the blink of an eye 40 years have gone by. Who would ever have thought that all these years later Dan and I would still be speaking to each other literally on a daily basis.

And we just don’t talk about VEGAS VOICE and VEGAS VOYAGER stuff. Between the two families there are six children, a number of grandchildren and a huge amount of family memories that we have created over these 40 years. It is safe to say we have been together at each families significant events, the good and the bad.

We have also traveled all over the world together. In fact, Dan pretty much won’t travel anywhere, as he says, without Sharon and Stu leading the way. We have just made to many family travel memories to count. Disney World, cruises to many to mention, Paris, Rome and Tahiti just to name a few.

It is in this spirit that we are headed out on our “40 years of Friends and Family” cruise this November 14 -21. We will be sailing on the Royal Caribbean Oasis of the Seas from Ft. Lauderdale on a 7 night Caribbean cruise. And we’d love for you to join us. Call 1-800-698-1101 and I’ll give you all the details.