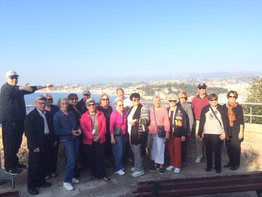 Here’s a quick travelogue of our most successful Med cruise and tour on the Royal Caribbean Serenade of the Seas. October 26 thru November 8.  It was absolutely fantastic and it seems that all members of the group had a great time.

We all arrived in the eternal city of Rome and started to adjust to the time change.  Many of us strolled over to the Coliseum for a tour and then to the Piazza Navona for an evening of pasta and people watching Italian style.

Vatican tour. The group enjoyed a cut to the front of the line Vatican tour which included many of the art and tapestry rooms to view the beautiful art work.  It’s hard to say whether the Sistine Chapel or St. Peter’s Basilica was the highlight. There was beauty and majesty everywhere the eye turned.

This was cruise embarkation day and the group was transported from our hotel to the port for Rome about an hour from downtown Rome.  The remainder of the day was spent exploring our home for the next 8 nights the Serenade of the Seas.

Pisa and Florence.  The group enjoyed a private guided tour in private vans that included visits to Pisa and Florence.  We saw all the major sights in each city including the leaning tower in Pisa, the Statue of David sculpted by Michelangelo as well as the Ponte Vecchio and the leather market.  We finished up the full day tour with wine tasting in Tuscany.  Just a breathtaking day.

The French Riviera.  We visited Nice, St. Paul de Vence, Monaco, Monte Carlo and the hillside town of EZE.  Once again we had a private guided tour for the group and we had one fun filled day.  We were at the Flower Market in Nice, the art galleries of St. Paul Devance, the casino, cathedral and Palace in Monte Carlo.  We say everything, and the French Riviera is not to be believed.  It is absolutely stunning.

Corsica, the birthplace of Napoleon.   This is the islands claim to fame.  The ship docked right in the heart of the main city of Ajaccio. A quick walk from the pier took us right to the main square for strolling the central market or just sitting in an outdoor cage, sipping some french wine and having a bit of lunch.  Oh, and by the way, throughout the entire cruise the weather was magnificent 65 to 70 everyday and sunny seven out of eight days.

Day at Sea.  We needed a day of no touring, just relaxing.  The group didn’t seem to mind the downtime with lounging around the pool or hitting the spa or just playing bingo.  And some of our Las Vegas residents even visited the ship’s casino.  It was a well needed day of leisure.

Palma de Mallorca.  this island retreat is a sunshine lovers destination with lots of beaches and lots of history.  A panoramic tour of the island included the castle, cathedral and (in)famous bull ring.

Valencia.   What a gem of a city.  The City of Arts and Sciences is an architectural wonder.  The only way to explain this sight is to post some pictures.  Keep an eye out for them on vegasvoyagers.com.  The old city is equally impressive in its ancient architecture.  You must eat paella in Valencia for it is said this is where the dish was invented.

Barcelona.  Gaudi’s Sagrada Familia church as well as the apartments he designed are must sees.  The Olympic Port is the absolute best place to have a great seafood lunch.  And finally just stroll along the La Rambla the main people watching street in Barcelona.