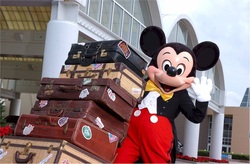 Now I have an excuse.   An excuse for what, you might say?  An excuse, of course to visit DISNEY WORLD.  My grown up kids, will tell you that Dad just loves Disney World.  In fact, when the kids were young, say between the ages of 2 and 22, our family would visit Disney World at least once a year.  Don’t get me wrong the children did enjoy Disney World, but not as much as me.

However, in the last 10 years my kids have gone on to other things, like going to college, getting married, and they really had no big desire to go to Disney World for the umpteenth time.  But with getting married often times (here comes the excuse) babies arrive. Yep, yes sir, yesseree  I just became a Grandpa!  And therein lies ………the excuse!

Now my grandson Jake, as I write this is all of one, yes one day old.  But I have already circled the calendar for the fall of 2016, (yes 2 years old is old enough for Grandpa to enjoy grandson’s first trip to Disney World) for Jake’s first visit.  I should probably ask his parents if he can go, but I’d like to think they have no say in the matter, because if they say yes I’ll take them along as well.

I guess I am a bit tongue in cheek about this but I really do believe in generational travel.  Traveling with grandparents, parents and (grand)children can add heaps of family memories to the memory bank  And that’s what it’s all about, accumulating stories and memories that can be shared around the table at family events over the years.

It doesn’t have to be a trip to Disney World.  It can be an intergenerational cruise to the Caribbean, or Alaska.  How about an all inclusive beach vacation at Club Med or a trip to Hawaii.  there are so many possibilities.

I’ve experienced generational travel as a parent.  Now I hope to experience it as a “Grandpa”.  I’ve been told by my parents that it’s way better to be the patriarch and matriarch of the family group.  Even if the grandparents pick up the tab.