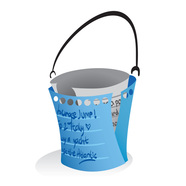 Do you remember the movie “It’s a Mad Mad Mad Mad World”?  I remember seeing that movie back in the early 60’s when I was only about 10 years old.  What a great great great movie it was and still is.  Just about every movie star in the universe was in the movie.

If you remember the whole premise of the movie was where was the treasure (money) buried.  And if you remember further Jimmy Durante, just after he crashed his car over a cliff whispered to those assembled, his last dying words, a clue  “it’s buried under the BIG W”.  Then poor Jimmy “KICKED THE BUCKET!”   Mass mayhem ensued as all the stars raced to find the money.

That’s what I remember most about the movie, Jimmy Durante actually, not figuratively kicking the bucket.  Fast forward forty years or so and it seems that we no longer talk of kicking the bucket, we talk of BUCKET LISTS.  People are now making lists of things they want to see and do before they die.  I think it’s a wonderful idea.  Make some sign posts along the way for things you want to accomplish.

In fact, another major motion picture was recently made staring Jack Nicholson and Morgan Freeman titled the Bucket List.  Two dying men one a millionaire and one a working man spend the last few months of their lives traveling the world to check things off their bucket list they want to do before they die.  On our last “Vegas Voyagers cruise in Europe I watched this movie one evening and started thinking about my own bucket list.

Now while I’ve had a few health scares, I am not planning on dying any time soon.  So since I figure I still have twenty or thirty yr=ears left why not make my own personal bucket list.  Let’s set some goals and dream come true possibilities.  Here then is what I have in mind for the next few years.

I’ve been pretty lucky with travel.  I’ve been to Europe many times.  I’ve visited Israel.  I’ve been to Tahiti and all over the Hawaiian islands.  I’ve been to Iceland and found it a unique and exciting travel destination.  This past September I got to see St, Marks Square and the Leaning Tower of Pizza.  And, I have traveled extensively in the good old United States.

So my bucket list of places to travel now includes first and foremost Australia.  I have always been intrigued about the land “Down Under”.  I want to walk the Great Wall of China.  Let’s include Hong Kong and Bangkok in there as well if I’m in that part of the world.  I’m not big on seeing India but I do want to see the Taj Mahal.  There are many other destinations on my list like South Africa and Peru but the others come first.

As for other things to include in my bucket list that do not include travel, well I would like to be the voice of an animated character in a movie.  I know I can’t act but maybe a voice over as an animated character would, satisfy my acting ego.  Maybe there’s a role for me in the next Madagascar movie or the next Simpson’s sequel.

I was a huge fan of Tim Russert, the moderator of “Meet The Press”.  I really enjoyed his analysis of elections.  I thoroughly enjoyed his book “Big Russ and Me” telling his father’s story as a World War II veteran and the values his father (and mother) gave to him.  His story resonates for me as the son of a World War II veteran.  I would like to host, just one time, a political TV show like “Meet the Press”.  Or, maybe one day Larry King will need a replacement.  As for writing a book?  Who would read it and what should it be about?

Keeping in line with current affairs a visit to the West Wing of the White House is a big dream of mine.  I would really like to see how the heart of the executive branch of the government operates.  And while we’re at it how about a ride on Air Force One?  That’s one for the bucket list.

I’ve written before about our military and great places to visit if you want to honor our military and those who have served.  Visits to Pearl Harbor and the Military cemetery in Luxemburg are at the top of the list of places I have visited.

However, the most important item on my bucket list is to be a part of a USO trip that entertains our troops overseas.  I don’t believe there is anything nobler one can do than to put oneself in harms way to make the life of our military a little bit more enjoyable while they defend our country.  I would be more than happy to be a “gofor” or “roadie” for some of the stars who entertain our armed forces.  It doesn’t matter where they send me just as long as it’s where the troops are.  It would be a true honor and privilege to do something like this.