We Have the World to Talk About 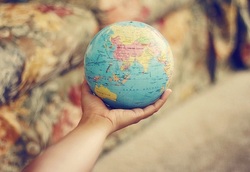 What a whirlwind trip we had to Las Vegas last month for our June Vegas Voyagers meeting.  We flew in Thursday night and turned around Sunday morning and flew back to New York.  During that time we met with a number of companies we work with to make our Voyager trips seamless and easy for our members to book.  We also crammed in a couple of Vegas shows and of course had our Saturday morning VEGAS VOYAGERS TRAVEL CLUB meeting.  Close to 100 “Voyagers” attended the meeting.   Upon returning home Sunday afternoon, we realized we probably needed a vacation.
Our Vegas Voyager meeting included presentations from representatives from Royal Caribbean Cruise Line, Celebrity Cruise Line and UniWorld River Cruises.  To say the least, the meeting was information packed.

Here are some highlights of the meeting.  First and foremost there is still room on our “Publishers/Travel Editors cruise on the Royal Caribbean Serenade of the Seas October 29th in Europe.  We have over 30 people participating but, like mentioned, we have room for more.  The cruise starts in Rome and ends on November 6th in Barcelona.  In October we also have a “Bus to the Boat” for a Mexican Riviera and the Carnival Miracle October 11 to the 18th.  We have over 30 “Voyagers on that group as well.  If Hawaii is for you than give us a call for the 15 night Hawaiian Island cruise also on the Carnival Miracle December 6 – 21.

For the really adventurous with time to spare you can sail on the Crown Princess 28 night cruise round trip from Los Angeles to Hawaii, Tahiti and Samoa.   We have a nice group of folks cruising on this sailing as well.

Moving  into 2015 there are two great cruises that I am really excited about.  For just a little over $3,000 per person you can take a 14 night cruise round trip from Singapore on the Celebrity Century visiting Vietnam, Brunei  and Bangkok, Thailand starting February 22, 2015.   And that price includes the cruise, round trip airfare from Las Vegas to Singapore, airport transfers in Singapore and all port charges and taxes.  A balcony cabin is only a little over $4,000 per person.  I have never seen Asian cruise/air packages this low.

And then there is our anticipated Nevada Spirit of 45 cruise on Royal Caribbean’s Explorer of the Seas May 15 -23 cruising Europe.  Ports of call include Bruges Belgium,  Oslo Norway, Rotterdam, Netherlands, Cherbourg and La Havre, France.  One of the highlights of the cruise will be to the D Day beaches to honor our Greatest Generation.  We will also commemorate the 70th anniversary of the end of World War II.  There are even special cruise rates, that if booked before July 15 bring cruise rates for an inside cabin as low as $810 per person.